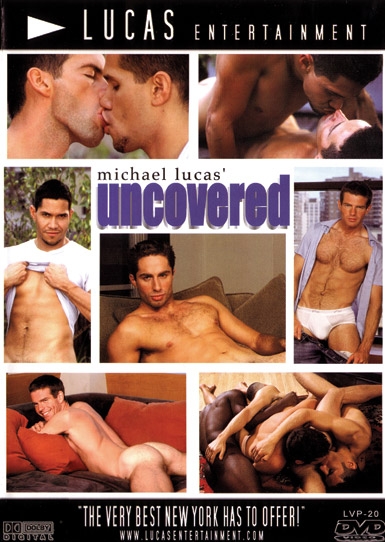 With Uncovered, Michael Lucas directs a stable of his favorite stars, bringing the cameras up-close and personal. Whether presenting favorites such as exclusive Marco Rochelle, Rick Gonzalez and Aaron Heights or introducing newcomers like Jett Allen and Johnny Morelli, Lucas exposes the animal sexuality that lurks just beneath the surface of these hunky men. * This title is only available as part of our Lucas Collection Volume 3. For the same price, get Uncovered, Pick of the Pack, and Apartments together!

Marco Rochelle and Dean Edwards return for a hot duo scene. In fact, its so hot that they dont even wait for Lucas to call for action. Theyre already going at it when the cameras start rolling. The eager studs suck and finger each other. Then they show the versatility that Lucas requires before jacking off to an amazing climax.

Toned from years as a professional dancer, Aaron is one of the most pleasant and professional guys we've ever worked with. He's always very helpful, considerate, and can get along with just about anyone.

Hung hottie Alec has a gorgeous smile, beautiful eyes, a perfect dick, and the sweetest personality you could find. He's also a versatile performer.

Antonio Vela splits his time escorting between Montreal and Chicago; both places he considers home. Antonio is a self-described "simple person", who enjoys rollerblading, tennis, and the passion of sex. He prefers being a top, but remains open to versatility.

Chris Bolt is another Michael Lucas discovery, and a longtime favorite to work with (I think we must have run out of exclusive contracts at the time or something). Well, Chris is now a big star, and it's easy to see why: He's absolutely adorable; has a great personality; and he's a very convincing versatile performer. And, if you ever get the chance, ask him about joining the Mile High Club.

Dean is a versatile performer who made his debut in our movie Sexual Infidelity. Since then, we reunited with this sweet and very professional native New Yorker on our 20th feature, Uncovered. Dean fills in his time between movies escorting locally, in New York City.

Unfortunately, Johnny had his energy-sucking boyfriend (Jett Allen) on the set and in the scene with him in Uncovered, because otherwise, he was very professional and totally into the experience. We might even cast this sexy, muscle-bound New York local in another movie someday.

Marco Rochelle is arguably the hardest working performer out there. When Michael Lucas discovered him in Paris â€” and subsequently cast him in the production Inside Paris â€” he immediately saw Rochelle's potential to become a big star, and signed the versatile performer as a Lucas Entertainment exclusive. Since then, the well-tailored and mild-mannered Marco has become a hit with industry folks and fans alike, garnering a reputation as a true class act.

What is there to say about Michael Lucas? A good place to start is the beginning: Lucas Entertainment founder and president Michael Lucas was born in Moscow, Russia, on March 10, 1972. He was raised in Moscow and attended college there, graduating with a degree in law. In 1995, Michael Lucas moved to Germany, then to France, where he began modeling and appearing on several European television programs and covers of many European magazines. In 1998, Lucas opened his own production company, Lucas Entertainment, in New York City. Later that year, he made his directorial debut with the well-received Back in the Saddle. This first production sparked the Michael Lucas "renegade" vision that is indelibly New York. Additionally, basing his company in New York City, as opposed to the more traditional Los Angeles, enabled Lucas to showcase the diversity of types and ethnicities found nowhere else. MIchael Lucas started Lucas Distribution, Inc. in 2004 and LucasBlog.com in 2005. Both are pioneering ventures in the competitive realms of adult video distribution and online media, respectively. In the summer of 2005 he released GayVN's Best Picture of the year, a high-budget adult film remake of Dangerous Liaisons, featuring celebrity cameos from RuPaul, Boy George, Graham Norton, Bruce Vilanch, and Michael Musto. In 2006, filming began on his most buzzed about film ever, Michael Lucas' La Dolce Vita. The production included a big-budget fashion show, a sextra-filled club orgy scene, a headline-making fountain scene with Vivid star Savanna Samson. On November 12, 2004, Michael Lucas was proudly sworn in as an American citizen.

This Uruguayan has a great combination package of face, body, ass, and dick. If we could just unscramble whatever the hell he's talking about all the time through his adorably thick accent we'd really be set! One of Rick's talents is that he's a professionally trained acrobat, and we constantly have to pull him away from walking around on his hands or doing cartwheels on the set to get him back to work. And if it hadn't been for one fate filled day in 1999, when Michael Lucas discovered the fun-loving Rick doing handstands for tourists in Stonewall Park on Christopher Street, we may never have had the chance to embark on this long-standing work relationship with him.

Taylor Westin was a newcomer to the business when he appeared in our movie Uncovered. During the downtime and lunch breaks on that production, this professionally trained dancer was commonly found exchanging dance moves with fellow cast members Aaron Heights and Chris Bolt. This versatile performer is a sweetheart with a beautiful body and a big dick (which is probably why our layout of him graced the pages of Black Inches magazine in July 2003), and was a dream to work with.

Superstar Michael Lucas returns with the 20th release from his production company, Lucas Entertainment. With Uncovered, Lucas directs a stable of his favorite stars, bringing the cameras up-close and personal. Whether presenting favorites such as exclusive Marco Rochelle, Rick Gonzalez and Aaron Heights or introducing newcomers like Jett Allen and Johnny Morelli, Lucas exposes the animal sexuality that lurks just beneath the surface of these hunky men. He strips them of their inhibitions and allows viewers to see them in the most revealing situations. Lucas also explains his vision of versatility for his models and his hope to see them all on both ends of a good fuck. This and much more awaits in Uncovered.

Scene Four: Marco Rochelle and Dean Edwards return for a hot duo scene. In fact, itâ€™s so hot that they donâ€™t even wait for Lucas to call for action. Theyâ€™re already going at it when the cameras start rolling. The eager studs suck and finger each other. Then they show the versatility that Lucas requires before jacking off to an amazing climax.